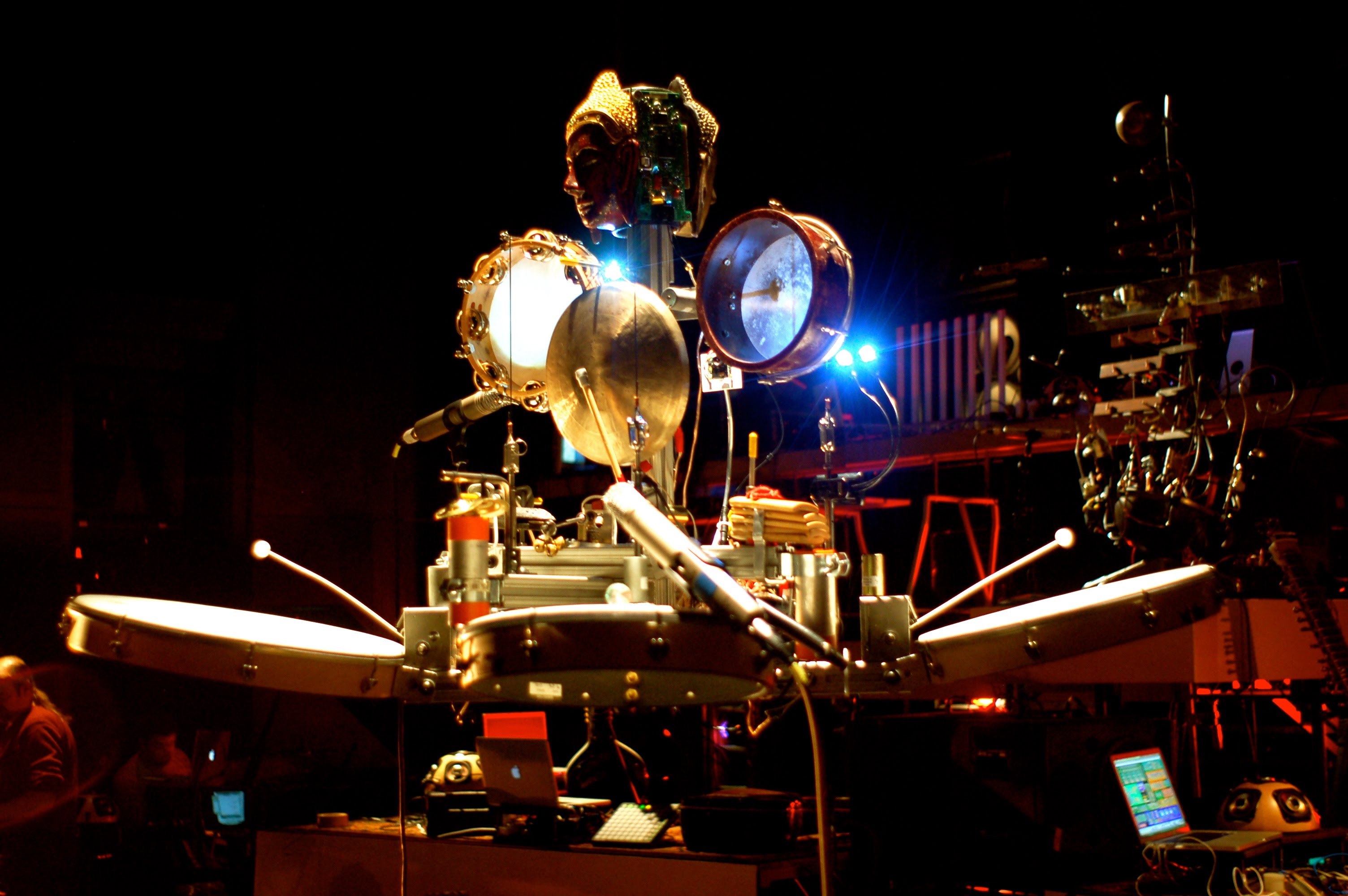 Mahadevibot is a percussive robotic work by Ajay Kapur that is part of a larger ensemble, KarmetiK Machine Orchestra. Built in 2006 as “a proof of concept robot for various methods of solenoid-based electromechanical percussion techniques,” the work includes 12 traditional Indian instruments.

As its title suggests, Mahadevibot is a mechanical manifestation of the multiple-armed Hindu goddess, Mahadevi. Similar to Mahadevi, who is regarded as the “Great Goddess” or an all-encompassing deity, Mahadevibot is seemingly the mother of all instruments.

Mahadevibot can be interacted with via a screen-based visual interface. The bot has a head attached to its center that bobs up and down in time with the music and can be used by human performers to exchange visual and rhythmic cues.

It can be performed with, in real-time by multiple artists composing musical ideas on the fly. The bot requires very little supervision while performing. It is capable of generating complex polyrhythmic musical patterns that evolve over time in an intelligent way. Osaka I is a robotic sculpture by the artist Robert Breer, that is comprised of a fiberglass shell, steel frame, battery-driven motor, and rubber-tire wheels. Created in 1970 by Breer and a collective of artists and engineers (Experiments in Art and Technology) commissioned by PepsiCo, Osaka I was first displayed at PepsiCo’s pavilion at Expo ‘70.

Osaka I does not resemble a robot in the traditional sense such as exhibiting human-like characteristics in either appearance, function, or communication. It has a large white faceless dome for a body and moves ever so slightly every few seconds; any mechanical components are concealed. The work does not emit any sound.

Apart from its extremely subtle movement, Osaka I could easily be mistaken for a sculpture or architectural element. The piece conveys a sense of personality through humorous and polite interactions. It might gently brush against an object or person in space, but quickly retreats and never quite draws attention to itself.